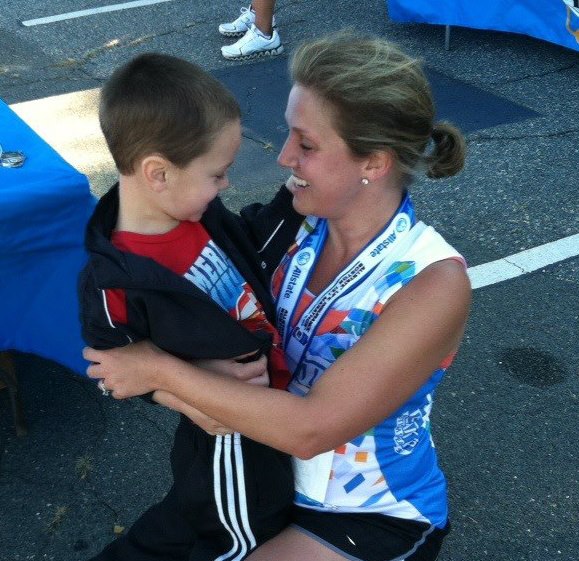 I love the “On this Day’ feature on Facebook to look at memories and old pictures of what I was doing in previous years on that same exact day.  They always bring a smile to my face or make me realize how much children and a consistent lack of sleep has robbed me of my youthful looks.  Today’s memories went much deeper than a smile and reminder of a fond memory.  It reminded me that often one picture has such a BIG story behind it and this photo is that for me.  It’s where my whole entire journey began with speaking about Autism and our family and where I started running and raising money.  In this photo, I had absolutely no idea where it would take us 5 years later.

This photo was taken immediately after I had just crossed the finish line of my first half marathon in September 2012.  A year earlier, I had just received the Autism diagnosis for our son. Many people that knew me back then knew I never talked about it. When it came to Autism, I couldn’t say the word, write it or read it.  I wasn’t ashamed of my son and who he was, but I desperately feared what that label would mean for him and his future and how others would look and treat him. I didn’t want limits put on him and I didn’t want people to just see a disability and never focus on all of his abilities! That was such a tough time for me and I’m not proud of how I handled it all but I handled it the best way I could at that point in time. I retreated and kept to myself.  I started running to help get me out of my funk.  I decided that to help me process it all, I was going to sign up for a half marathon so that I could focus more on something positive and set a goal for myself.  I also wanted to make sure that if I was going to run and start to focus on the good, I was going to force myself to get involved with an organization that raised money for Autism.  I knew if I had to raise money, that would give me plenty of reasons to talk, read and write the word Autism, and I needed that.  I had run for Autism Speaks that year. It’s where it all began.

During my training runs, my head was racing with thoughts of my son and I will admit I thought a lot of “Why Him, God?” (I’ve since asked God to forgive me for that question.)  I made the mistake of saying those words to my Mother and my Aunt Bea one day to which they responded, “WHY NOT HIM?!” I did not grow up with women that allowed you to feel sorry for yourself or throw a pity party.  I remember being furious with the both of them that day (and maybe a few more after that) because I just wanted someone to understand my anger and how alone I felt through it all.  My anger and loneliness fueled my training runs, while fundraising made me focus on helping and making a difference.  I was heavy into my Real Estate career at that time, so my days consisted of searching for homes for my clients and “googling” all I could about Autism….but hey, I was now typing the word for that google search so something was working!

Shortly before the big race day, on Labor day weekend of 2012, I had a run-in with an absolute ignorant man at the beach.  I was with my son, my baby girl and my Mother.  Sheamus fell apart and had a meltdown when I applied Sunscreen to him.  The sunscreen and the sand were all too much for him.  You couldn’t ignore his screams and he was running and I was chasing him all over.  I finally got him and brought him back to our blanket when I hear a little boy right next to us say to his Dad, “Why was that boy screaming like that?” To which the father responded nice and loud to make sure I heard, “That right there is the perfect example of bad parenting.”  I remember it like it happened 5 minutes ago. My blood was boiling and the adrenaline running through my body was like nothing I’ve experienced before.  I asked my mom to head to the water with the kids so that I could head over to this man because I couldn’t stay quiet anymore.  I went up to this man’s blanket and said that I couldn’t help but overhear how he felt that my son’s meltdown was a perfect example of my bad parenting.  I remember his smug look and his cocky attitude as he nodded “Yes”.  I corrected him. “I wanted to let you know that his behavior is actually the perfect example of Autism. And you’re the perfect example of an ignorant asshole.”  He started to say he was so sorry, but I had turned and started to walk back to the water. I remember smiling and my hands shaking.  I had said aloud that my son was Autistic.  I then went and posted my experience at the beach on Facebook and that was the point that I had started writing about it and had publicly let friends and family know about our son’s diagnosis.  I don’t think it was a shock to many.  I think it became more of “Oh good, she does know.” sort of a thing for some.

Race day came and I was excited to just get it done and over with.  I knew my family would be there waiting for me as I crossed the finish line.  During my run, I thought about all that had brought me to that day and the journey that I had been on to get there.  I also worried about my son and how he was handling the commotion at the finish line as they waited for me and if all was ok with my daughter and her nap schedule.  I tried to run faster which only backfired on me.  I was so close but I was so tired, physically and emotionally drained by the last year of my life.  I was nearing the last corner where I’d turn and head to the finish line.  It all hit me.  I started weeping like a crazy person as I ran.  I just wanted to see my family.  I just wanted to see Sheamus.  In comparison to all the miles that I had run before that final turn, this one seemed the longest and my mind raced with thoughts and personal vows that I was making to myself that only made me cry harder.  I was a hot mess….  I was blessed that one of the seasoned runners and an amazing Autism Dad, cheered me on as I ran down the last leg of the race. I bawled my eyes out as I committed to myself to not let what anyone believes about my son or Autism dim my hope and faith that Sheamus will be seen for the AUSOME person he is and his strengths.  I vowed to make a difference by educating who I can about Autism.  I knew my fear and not being able to talk about Autism came from my fear of people not accepting my beautiful boy for who he is or really understand what Autism is.  I promised to do what I could to promote Autism acceptance and awareness.  It all started with the decision to train, run, fundraise and finish that race.

They were all there to cheer me on as I approached the finish line.  I saw my boy’s face and in that moment, I dug down deep to race across that finish line and get to him.  My ugly tears quickly changed to a big smile as I got my medal and got a hug from my boy.  This picture captures that moment.  It doesn’t tell the whole story and all that led to that picture-perfect moment, which is why I needed to tell it here.  That year leading up to the day this photo was taken was such a big one.  That year was a painful one for me but so much good has come out of it.  I’ve gone on to run two Boston Marathons while raising money for the Bruins Foundation with funds earmarked for thier work with Autism and the Doug Flutie Jr. Foundation for Autism and then starting our own foundation where our mission is to help everyone “Embrace their AUsome”, because when I see my son all I see is just a whole bunch of AWESOME.

They say the journey makes you or breaks you.  This journey has done both for me.  If I hadn’t been broken, none of this would have come to be.  Trust the journey.  Everything that happened can be part of the wonderful person you are, even the tough stuff if you allow it.

I'm far too complex to write about in this small box. But to sum it up, I've learned alot through life's many lessons. I've learned you have to enjoy this life because it's the only one you've got. Never give up on your dreams, no matter how long it takes you to achieve them. Be happy! Negativity and Anger will destroy you little by little. Life is beautiful and I try to remind myself to look at the little miracles around me when life gets crazy. Some days are easier than others to do that, but I'm still a work in progress. :)

Donate to help a child.